Node.js popularity has been all time high and so is the need for good Node.js developers. I have been to some node.js/javascript interview’s and  I am writing this blog to share my experience.

So what interviewer is looking for a node.js person?

Javascript was written in just 10 days in May 1995 by Brendan Eich. 10 days is quite short time for a programming language which is killing the industry right now. In 1996 – 1997 JavaScript was taken to ECMA to carve out a standard specification, which other browser vendors could then implement based on the work done at Netscape. JavaScript was historically known as language of the browser until Node.js was born. Then people start using it for server side too. So today full stack development in Javascript is possible.

This video from Douglas Crockford touches all the good parts for javaScript(if you are not already familiar).

What is inheritance model in javascript  ?

Inheritance is concept where child class can inherit the properties of parent’s class. There are two types of inheritance in javascript.

a) Prototypal inheritance (by use to prototype).

b) Differential inheritance (by use of Object.create()). 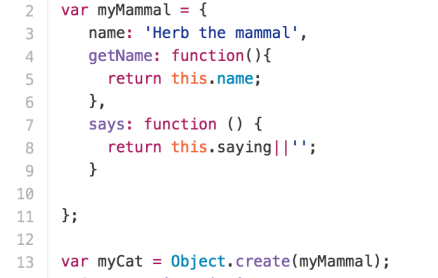 What is a closure?

Closure is concept in javascript where a function can return a function.The pattern of public, private, and privileged members is possible because JavaScript has closures.  What this means is Inner functions will always have access to var and parameters of outer function even after when outer function is returned.

Hoisting is a JavaScript’s default behavior of moving declarations to the top function. 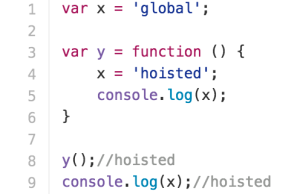 What is the difference between Call vs Apply vs Bind ?

What is type inference? can you explain  the difference between the == operator and the === operator?

Type inference is when the javascript interpreter tries to determine the type of a reference in the runtime. “==” performs type conversion before evaluating the comparison  and “===” is used for strict comparison (will return false if type of two values which are to compared does not match).

These are some basic javascript questions you can expect in technical interview.I have few more example on my github. I would recommend taking a look.

What is the use of this keyword ?

This keyword is generally used to refer properties of an object that the function is bound to. This keyword is usually used inside a function. It can be used outside the function too in the global scope but its not recommended to use this in this way. In strict mode this refers to undefined.

Does Javascript uses pass by value or pass by reference?

Javascript uses both. Arguments (for example function arguments) are passed by value. i.e if a function changes an argument’s value, it does not change it’s original value.

Objects are passed by reference. i.e If a function changes an object property, it changes the original value.

How to write a callback function?

This is very important concept for node.js. A callback is function which can be passed on to another function as an argument. At some point in time later in the call back function is executed.

Express is highly opinionated web application for Node.js application. Express is commonly used to creating an API layer for your application but it can also be used for rendering an html page. Many popular framework are built on express.

Read more about frameworks for Node.js.

Some questions you an expects on Express framework:

How can you create a route in express ?

Routing refers to the definition of application end points (URIs) and how they respond to client requests. Route are created in express using express.Router() module. Here is an example: 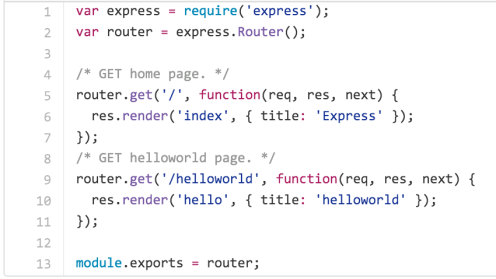 This is used for loading middleware functions at a path for all request methods.

What are different response type in express?

What is middleware in express ?

An Express application can use the following types of middleware:

How to serve static files in express ?

We will keep few images in public/images sub-directory as follows:

What is event loop in Node.js ?

A JavaScript runtime contains a inbuilt message queue, which is a list of messages to be processed. In a typical node.js environment  each message is associated with a call back function. When the stack is empty, a message is taken out of the queue and processed. The processing consists of calling the associated callback function. The message processing ends when the stack becomes empty again and this process is repeated.

Handling I/O in node.js is  typically performed via events and callbacks, so when the application is waiting for a database  to insert/update  to finish, it can still process other things like user input.

Is Node.js single threaded ? How can you make it multithreaded?

Yes. You can make it multithreading by using a node cluster.

What is clustering in Node.js?

A single instance of Node.js runs in a single thread. To take advantage of multi-core systems the user will sometimes want to launch a cluster of Node.js processes to handle the load. 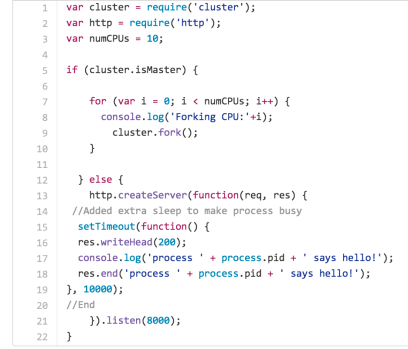 What is preferred way to handle unhandled exceptions in node.js?

Unhandled exceptions in Node.js can be caught at the Process level by attaching a handler for uncaughtException event.

npm is packaging ecosystem for node.js, is the largest ecosystem of open source libraries in the world.

Grunt or Gulp both are popular task runner for node.js application.  It is usually used to group tasks like minification, compilation, unit testing, linting etc to be done in automated fashion.

The Promise object is used for asynchronous computations. A Promise represents an operation that hasn’t completed yet, but is expected in the future.It allows you to associate handlers to an asynchronous action’s eventual success value or failure reason.

A Promise is in one of these states:

ES6 is the new way for writing javascript. A lot of new features is added with ES6 to make javascript feels like a better programming language. Node version greater than v4 supports ES6 natively. This make it easier to use all new features.  Read more about ES6 here.

Mocha and Jasmine are two most popular testing framework which are very well integrated with node.js.

✓ Both support Asynchronous Tests
✓ Both support CI (continuos integration) build. Can be easily integrated with Jenkins.
✓ Both allows you to organize tests in suits
✓Supports both client-side and server-side testing

Usually you will be asked to solve a algorithm style question. Most of the companies if you are applying for contract role usually don’t usually ask for Big O analysis. If you can solve the problem in the given time you will get a job. I have listed all the common question in my github repo that i have seen so far. Other places where you can practice these type of questions for free are hackerrank and leetcode.

Sitepoint also have good list of questions to practice :https://www.sitepoint.com/5-typical-javascript-interview-exercises/

Usually you will be presented with a broken API built on Node.js and Express.js. You will be asked to fix it in a limited time. Here is the solution to above problem.